Alison Roman, former senior food editor at Bon Appetit and wildly-popular Instagrammer, has released her first full cookbook, Dining In, a collection of contemporary, easy-to-cook dishes. In it, Roman makes quite a few promises to prospective readers, including these, from the back cover:

“I promise I will never ask you to make something in two skillets if it can be done in one. I will never ask you to buy an ingredient you’ve never heard of unless I can defend it within an inch of my life and tell you 20 other things to do with it. And I promise that you will learn at least one thing that will make you a better and more independent cook for the rest of your life.”

In addition, Roman won’t ask you to buy any new appliances or do any fussy prep. She calls her cooking style “lo-fi,” a slack-sounding kitchen philosophy that’s actually all about smart planning and good condiments. Best of all? She promises that her lo-fi recipes will still yield delicious food, suitable for those of us who love salty, savoury and punchy flavours.

Well, count me in.

It’s an exciting book to open, since every page reveals a new, gorgeous dish, most of which look fresh and healthy. Best of all, they don’t look too involved or daunting. Beyond spreading the gospel of “lo-fi” cooking, Roman has an even more ambitious hope, namely, that home cooks will feel emboldened to riff off her recipes, instead of treating them literally.

As such, the key to the book is its first 27 pages, wherein Roman outlines her pantry staples, most of which are from Mediterranean, Asian or Latin food cultures.

These include store-bought items and home-made condiments, most of which are simple, versatile salad dressings or sauces that perk up roasted vegetables. She had me at za’atar — I’ve always wanted to cook more Middle Eastern food, but, until now, have filled the void with take-out.

Salted Butter and Chocolate Chunk Shortbread or Why Would I Ever Make Another Chocolate Chip Cookie Again?, page 261

First-up was the Lemony Tahini Dressing, which Roman enthusiastically bills as a sauce that would improve almost everything from crudité to roast chicken. It was dead-simple to make and honestly quite delicious. It’s amazing in a spinach salad.

Encouraged by this early success, I delved into a full dinner. I paired Roman’s Fennel-Rubbed Pork Chops for Two with the Fried Eggplant with Harissa and Dill, since she talks up the eggplant as a tasty side, snack or topping for salads. All told, dinner prep took me about an hour, which isn’t bad for two new recipes. I could shave at least 15 minutes off that if made them a second time.

Speaking of 20-20 hindsight, the pork chops would have been much tastier had I applied the dry rub 24 hours in advance, a recommendation I didn’t discover until I was half-way through the recipe. That information would have been useful in the recipe’s “Do Ahead” section. Mildly annoyed, I opted for Roman’s fallback plan: 30 minutes.

As for the eggplant, I wasn’t sure at the moment of the first, intense, slightly oily, bite. The dish lacked crunch, but the spice made up for it, and became better integrated after spending the night in the fridge. By the time I was scarfing back the leftovers the at lunch, I knew my life had changed a little, for the better.

For the next test, I opted for the Skillet Chicken with Crushed Olives and Sumac, and Blistered Green Beans with Creamy Tahini and Fresh Hot Sauce as the side. The whole thing took under an hour and hit on all levels — the recipes were easy to follow and yielded delicious results. The blistered green beans were tossed in a little a-la-minute hot sauce and sat atop a thin layer of tahini-labneh sauce, which was a revelation. Almost any green veggie could be prepared this way.

And then came the cookies. Roman’s Salted Butter and Chocolate Shortbread has gotten a whole lot of love on social media (even topping Bon Appetit’s most popular recipes so far this year,) which should probably tell us all a little something about people’s real-life practices when it comes to New Year’s resolutions.

So, I set out to discover: Are they really all that?

The recipe is a bit of a departure from the rest of the book, since it requires a fair bit of fussy prep that plays out over a couple of different stages, not to mention three types of sugar.

Probably due to my incompetence with rolling the dough in plastic wrap, the end result was considerably less attractive than the picture. As to the taste, it was a decadent, salty, buttery piece of shortbread with over-sized chocolate chunks. Hard to complain.

That said, from my perspective, the end results don’t justify the extra effort, which, aside from rolling out the pastry in plastic (harder than it looks), also involves coating it in demerara sugar, a messy ordeal. Next, you have to cool down the dough until it’s cold enough to slice. Let it get too cold, though, and chunks break off. A lot of goodness of this recipe comes from the salt, butter and oversized chocolate chunks. I’d simplify the process in the future by baking it like a standard chocolate-chip cookie.

You really can’t go wrong with this book. Almost everybody on the planet wants to learn how to make the most of vegetables these days — something this book delivers in spades, with sides and an extensive salad section.

The raw ingredients are budget-friendly, the recipes are approachable and the advice useful. Roman, for example, explains why bone-in, skin on chicken is the best and why it’s worth it to splurge on a better, thick-cut porkchop. 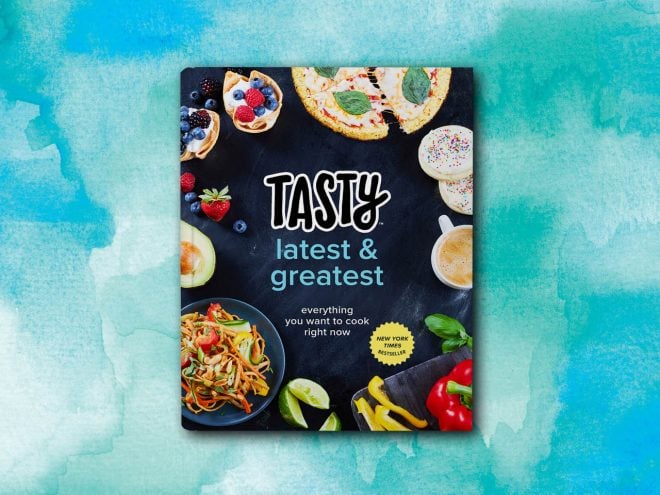 Are The Over-The-Top Recipes In Tasty’s New Cookbook As Good As They Look?

Most importantly, the book lived up to its promise. New pantry staples were well worth it and, aside from the cookies, the recipes were simple. No new appliances were bought in the making of this cookbook review. And I certainly learned things that will make me a better cook. Including the fact that I should read the whole recipe first, before even shopping for ingredients, so as to avoid the pork chop problem.

Who To Buy It For

Where It Will Live

On your pantry shelf, next to your new staples.