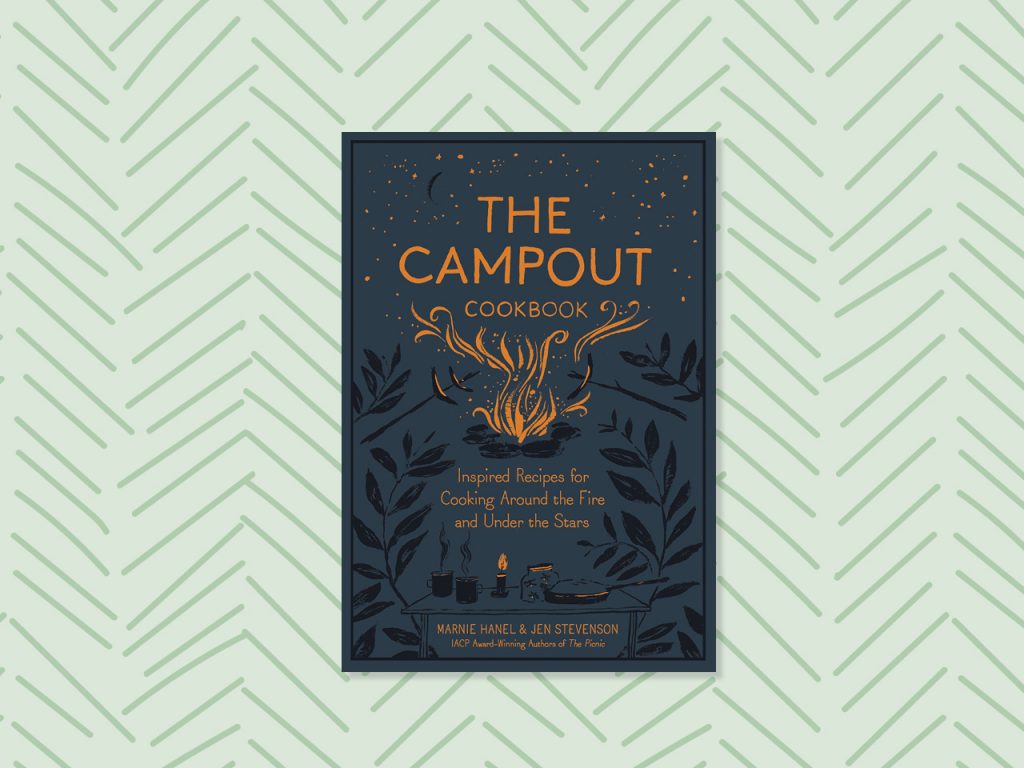 The Book:  The Campout Cookbook, by Marnie Hanel and Jen Stevenson, $27

This book promises fun from page one. The dedication reads “For Survivalists With Standards” and the following chapters include recipes for Furtive Flask Cocktails and Double Decker Pineapple Mug Cake. You’ll also find tongue-in-cheek advice like “99 Ways (and Counting) to Use Your Thermos” (hint: it can double as an ice bucket) but the authors also deliver what looks like a solid set of recipes ranging from classics (a dozen s’mores variations) to nostalgic (the Mug Cakes) and a little campfire upscale (Bootstrap Bibimbap). Best of all, they promise that all the dishes will work just as well at home as they do on a camping trip, which is what I’m counting on as I test drive these treats from the comfort of my kitchen to serve for a backyard soiree.

I was smitten the minute I opened the faux-leather cover (so soft!) and saw the whimsical illustrations; artist Emily Isabella can make a sketch of Fritos topped with chili (Frito Pie) seem aspirational. The combination of the sophisticated art and handy info for camping hacks and prep lists sprinkled amongst the recipes (such as Camp Cookery Essentials and the The Ultimate Camp Kitchen) made me feel like I was holding the only handbook I’d ever need to master the outdoors (you know, when roughing it includes packing a 15-pound Dutch oven).

As for the camping food, the recipes that caught my attention were those that define the way I’d eat if every night was “Friday movie night” (meaning, meals where you totally carb load and eat fruit only as a pancake topping) so basically, my ideal camping menu.

Before I skew the book too much into the land of excess, I’ll note that there are also salad, fish and grains recipes in this book —I simply ignored them.

Unlike other cookbooks where I attempted to forge some sort of a meal from the recipes, here I just couldn’t help but pick only the things that I craved.  But this doesn’t seem to be a book too concerned about rules, and in my view, campfire eating shouldn’t be either.

I did try to choose recipes I could actually see myself cooking while camping (even if home prep was required in advance) and which would be easy enough to pack and travel with.

Here’s what I made (some of the recipes were used together in one dish):

I jumped in with the Golden Beet Pickled Eggs because they seem like the ultimate snack when eating outside and having a bevvy. I’d seen these beet-dyed egg recipes before (cooked beets pickled with hard-boiled eggs, which turn the eggs a rich shade of pink or gold) but never tried one. My local grocer didn’t carry the golden beets, so I went with red. The instructions were straightforward, requiring more time than skill — cooking and cooling the beets took about an hour. Once jarred (or Tupperwared in my case), I let them sit for 24 hours. I did have to add some hot water to the brine as there wasn’t enough liquid created from the recipe to fully cover all the eggs and beets (the instructions call for 3 beets so it may simply be that the beets I chose were on the larger side). The ruby-hued eggs looked beautiful when sliced and were a huge hit at our Sunday dinner party — our guests said they really liked the flavour because the vinegar notes weren’t overpowering. This recipe is a keeper.

Next I moved onto the Camp-ari Cups. Partly because they needed to be refrigerated to set (the idea is that you make them at home, and once solid, put them in the cooler to take with you), but mainly because, why wait when you have the chance to combine Campari and elderflower liqueur to create “food”? The mixture came together about as fast as a cocktail, which I then poured into twelve, 2-ounce cups and threw into the fridge. Results? Fun and yum. The grapefruit juice and lemon created a nice balance between tangy and sweet — and the colour was almost Millennial pink. Score one for Instagram.

Monkey Bread was my next task.  Imagine little balls of dough fitted snuggly into the base of a Dutch oven so that they’re touching (keeping the sides of the buns very tender and soft). Then you slather them with Spicy Roasted Garlic butter plus Parmigiano-Reggiano cheese, chopped parsley and red pepper flakes before baking the whole thing. The work is worth it just for the intoxicating smell that fills the air as they cook.

This dish uses the book’s recipe for Perfect Pizza Dough (which comes together easily in a food processor) as the bun base. You use half the pizza dough for your cast-iron pizzas and then half to make the Monkey Bread. Once at the campsite, these buns are quick to whip up because you make the dough, flavoured butter and the cheese mixture in advance. They cook in the Dutch oven right on the coals — about 375 F (nine hot coals under the Dutch oven, and 16 on top).

Lastly came the Smoky Smashed Potatoes, because as the recipe says, “only good can come of combining four of the most heavenly foods known to (wo)man: potatoes, butter, bacon and cheese.”  Turns out it’s a pretty straightforward road to bliss: boil your potatoes (stove or campfire), fry the bacon in a skillet and set aside, mash the potatoes in the still-hot skillet and top with Smoked-Paprika Garlic Butter, cheese and the bacon.  Cover and let it all melt together.  Serve to camp-mates (or guests) with steak, pork kabobs or just a summer salad, and then stand back and bask in their adoration.

If, like me, you’re a picky about buying new cookbooks (because you have so many) this one stands out from the crowd. It may seem a bit niche — and perhaps gimmicky — but it delivers really good food. Some of it simple, some of it a little more elevated, but all of it perfect for enjoying in a folding chair, flip flops on and the faint notes of someone strumming a Neil Young song down yonder. 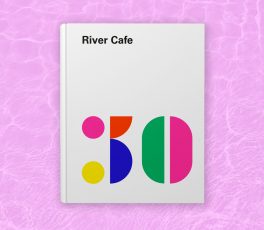 Six Simple Dishes From The Famous Restaurant That Taught Jamie Oliver A Few Tricks The Campout Cookbook also delivers plenty of guidance about cooking over an open fire or using a propane stove, plus problem-solving if it all goes awry. If you love camping but would rather be in charge of s’mores planning and camp-stove coffee than pitching a tent, this book is your ticket.

Finally, the book is also more than a fair-weather friend. You’ll find inspiration to add to the roster year-round such as breakfast board ideas (from the Israeli Daily to Wurst Wake-Up) to Peanut Butter Hot Chocolate and apres-ski inspiration like Chili 5-Ways. And don’t forget that in Canada we have many glorious months to winter camp.

Who To Buy It For:

Where It Will Live:

On the cookbook shelf with a few fave dishes earmarked for year-round cravings, awaiting the May 2-4 weekend when you pull it out for full-time use.

Master our Skillet S’Mores for the only dessert any campsite could need: