On the Hot for Food blog and on her YouTube channel, Lauren Toyota veganizes (yes, it’s a verb) traditionally meaty, creamy and cheesy comfort food dishes like nachos and mac and cheese. Her new cookbook features some of her most popular online recipes and dozens of new ones. With the new national food guide expected to encourage Canadians to eat less meat, Toyota claims she can help you experiment with a plant-based diet, without feeling like you have to give up your favourite indulgent meals.

At her recent Toronto book launch, Toyota admitted that at the end of the day, she’s a crazy vegan who hopes her work encourages others to stop eating meat. I took her words to heart while cooking my way through her book and went mostly vegan for about a week to see how I’d fare. 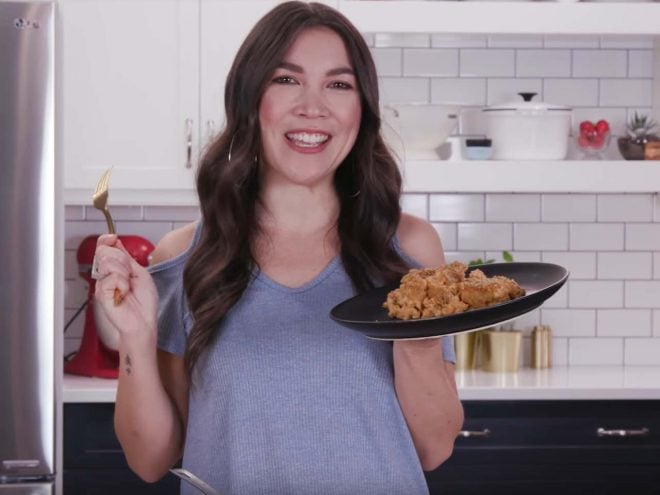 Vegan Mac And Cheese! How To Make The Classic Comfort Food Without Any Dairy

This book is beautiful. It’s filled with mouthwatering photos of over-the-top dishes. (Loaded Fries Supreme! Lasagna Soup! Tiramisu Trifle!) Every dish looks like it was made to be showed off on Instagram. Just like in her videos, Toyota keeps her book casual and conversational, with chapters like “Badass Brunches,” “Oodles of Noodles” and “Get Saucy.” This ain’t your crunchy granola-filled hippy dippy vegan cookbook.

I chose some of the creamiest recipes in the book to see if these vegan replicas were as good as my beloved cheesy and buttery dishes. Here’s what I cooked over the course of a weekend:

Let’s start with the Philly Cheesesteak. The sandwich includes two components that have to be prepared in advance: The Nacho Cheese and Saved By Seitan. Despite its devilish name, seitan might be my favourite protein alternative, thanks to its rich umami flavour and dense meat-like texture. It’s made with vital wheat gluten (I bought a bag of this flour-like powder from Bob’s Red Mill on Amazon) instead of soy. Seitan is common in vegetarian Chinese cooking, but lately, it’s been popping up in vegan restaurants to replace sliced deli meat. You can find it stores too, but it’s easy to DIY.

This wheat meat starts off as a wet, slimy dough ball. It’s then formed into a log, baked for 90 minutes and cured in the fridge overnight. The next day, when I was ready to make my sandwiches, I cut it super thin and browned it with sautéed peppers and onions.

I quickly threw together The Nacho Cheese. It’s made with potatoes, carrots and jalapenos, plus some additional flavour enhancers, that are whipped together in a Vitamix (or any high-powered blender). Make a double batch because you’ll want to pour it over everything, including these sandwiches.

The Cheesesteaks were both tasty and filling. My partner, who rarely goes a meal without meat, devoured his and then moved on to finish mine. Too bad it took forever to make.

Next up, I tackled the Mushroom Fettuccini Alfredo. It seemed simple enough, but for this recipe, I felt like I used every dish and inch of counter space in my small galley kitchen. Thankfully, it was delightfully rich and satisfied my never-ending craving for pasta with cream sauce.

Like many creamy vegan dishes, this one had a cashew base. I was nervous it would taste overwhelmingly nutty, but simmering the sauce with mushrooms, onions, spinach and four cloves of garlic gave it the texture and flavour of a traditional alfredo.

I topped my bowl of pasta with The Parm, Toyota’s replacement for Parmesan cheese, a mixture of cashews, nutritional yeast and salt crumbled together in a coffee grinder. It would be unfair to compare The Parm to actual Parmesan cheese (it tastes nutty and salty), but it added a certain je ne sais quoi to the fettuccini. I’ll probably sprinkle the leftovers over popcorn.

For dessert, I tried Toyota’s Cinnamon Rolls. I started baking at 10:30 p.m. and was watching Grey’s Anatomy with a piping hot roll drizzled with frosting by midnight. The dough was easy to make and worked even though I had to swap out some of the all-purpose flour for whole wheat. Since it was egg-free and the recipe called for vegan butter instead of dairy, the cinnamon rolls weren’t as gooey as I would’ve liked, but they also weren’t as sweet, so I could trick myself into thinking I was eating a healthy, but still tasty, snack.

These dairy- and meat-free dupes were seriously delicious, proving that vegan food can be more than veggies and tofu. Just knowing I had leftover Nacho Cheese in my fridge made it easy for me to avoid a charcuterie board one night during my vegan journey (this was a very big deal for me).

However, the recipes were quite involved and time consuming. Many asked you to prepare a sauce in a Vitamix (otherwise you might not get the right consistency) and a garnish in a food processor (such as The Parm). Who has time for that when you need a weeknight dinner ready STAT? Some of the ingredients might also be difficult to find if you don’t live near a grocery store with an extensive health food or vegetarian section. Think of these recipes as projects for a Sunday afternoon.

It’s required reading for vegans tired of grain bowls and raw desserts. But don’t dismiss it if you’re an omnivore.

Who to buy it for:

Where it will live:

On your shelf, splattered with bright orange nacho cheese.

Watch: How to make a vegan grilled cheese