Latkes get all the glory around Hanukkah, but it’s time they started sharing the spotlight.  Tender, sweet sufganiyot — jelly doughnuts — get our vote for the most coveted Hanukkah treat. Like latkes, sufganiyot are fried. It’s customary to eat fried foods during the Jewish Festival of Lights to recognize the miracle that the holiday commemorates: a small jug of oil kept the menorah in the Jewish temple lit for eight days, instead of just one. 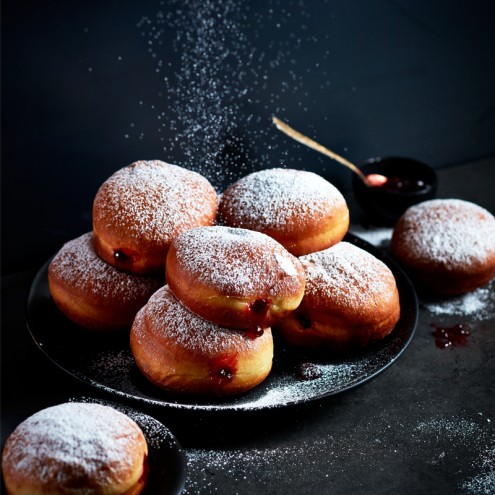 Sufganiyot first became a Hanukkah-time staple in Israel, but they’ve made their way around the world. Traditional sufganiyot look — and taste — like a typical powdered and jam-filled doughnut. However, pastry chefs and bakers like to experiment with them, including British-Israeli phenom Yotam Ottolenghi.

Ottolenghi and Helen Goh include a recipe for saffron custard-cream doughnuts in their new cookbook Sweet. These are based on a classic sufganiyah recipe. Ottolenghi has a critical tip for those looking to make sufganiyot — or any deep-fried treat — at home.

It’s essential, he says, to bring your oil to the correct temperature. It’s best to use a thermometer for this. Make sure your oil’s a little bit hotter than required because as soon as you add your dough, it’ll cool down. If it’s not hot enough, your pastries will be imbued with oil, instead of fluffy on the inside with a crisp and golden brown exterior.

And don’t be alarmed if you have some extra dough on hand once you’re done forming your doughnuts. The Chatelaine kitchen uses those scraps to make doughnut holes (AKA homemade Timbits) and then rolls them through some cinnamon and sugar once they’re out of the fryers.

But first master the perfect sufganiyot with this triple-tested recipe from our kitchen — a sure way to be the best host this Hannukah.