Q: How does it feel to have won?

A: It doesn’t quite feel real! People have started to recognize me, which has never happened before — writers of fiction don’t really get recognized very often. So I’ve got this plot to cut my hair off and go incognito.

Q: You’re fascinated by the symbolism of numbers. So Alice Munro winning the Nobel Prize in Literature at age 82 and you winning the Man Booker at 28 . . .

A: Ah, I didn’t even make that connection; that’s hilarious. Wow! Yes, there are a couple weird things about the number 28. I got an email from a numerologist in London, and he told me that 28, my age, is a perfect pyramidal number. It’s supposed to be quite magical because it’s the sum of the first seven numbers (1+2+3+4+5 . . .), and seven is also a magical number. He also told me that 28 is referred to as the “man” number, which is kind of weird because of Man Booker. Apparently you’re supposed to achieve full maturity at age 28 and that’s why they call it the “man” number.

Q: Do you read the horoscopes?

A: I do, with a bit of a laugh. But I think it’s interesting, because we come to astrology with the hope of understanding ourselves better, so we’re going to cherry-pick the information that’s useful to us and discard the stuff that’s not. The stories we tell ourselves about ourselves are very revealing.

Q: The book is a doorstop at 826 pages. How long did it take you to write?

A: About five years, but I was only really actively writing for about three of them. The first two years I was just reading and taking lots of notes and learning about the zodiac. Once I started writing, the first sentence of the book took me around six months to figure out. And then once that was done, I moved extremely slowly, and for the next six months I probably wrote about 500 words a day, if I was lucky. But then it started gaining momentum, because the novel began bringing up questions that I then had more tools to answer with.

Q: How do you conquer the loneliness of writing?

A: I read aloud to my partner, because he’s a poet, and he’s really lived inside of this book with me from the very beginning. I think the thing that’s lonely — and it has to be lonely — is risk. Because the risk is always just yours. Risk is something that you can’t share, because it has to do with your own bravery and your own cowardice and kind of overcoming yourself.

Q: You lived here until you were six; what’s your favourite thing about Canada?

A: I love the way that the Canadian accent uses volume and pitch. I think it’s a beautifully musical, lilting accent; it’s very gentle, and it seems to me to communicate kindness more than any other accent I know.

Q: You’re stranded on a desert island. What’s the one book you have with you?

A: I hope that it would be one I haven’t read yet: The Golden Bowl by Henry James.

Q: What’s the snack you reach for when writing, and hunger strikes?

A: Oh, that’s a really hard question! I suppose I’d go with coffee. We don’t have drip coffee in New Zealand, we only have espresso; we are notorious coffee snobs. 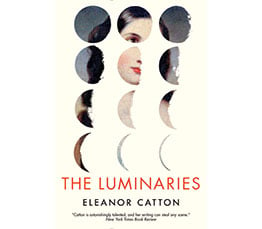 Centred on astrology, The Luminaries chronicles the mysteries involving 12 characters in the small town of Hokitika, New Zealand, during the gold rush of 1866.