It’s been 20 years since the Bill Clinton–Monica Lewinsky scandal rocked American culture and politics. But it bubbled up again this week in a big way when Clinton was asked during an interview if he had ever apologized to Lewinsky, and if he looks at the whole scandal differently with the benefit of hindsight, as the #MeToo movement continues to hold powerful men to account. It … didn’t go so well for the 42nd president of the United States. Here’s what you need to know:

What exactly did Bill Clinton say?

As part of a tour to promote his new novel, a thriller co-written with bestselling author James Patterson, Clinton and Patterson sat down with NBC News’s Craig Melvin to talk about the book and, of course, other stuff. In the interview, which aired Monday, Melvin asked the ex-president if he would have “approached the accusations [of sexual misconduct with Lewinsky] differently” if he were president in 2018, “with everything that’s going on with the #MeToo movement.” Clinton responded with an emphatic “no.”

“I felt terrible then, and I came to grips with it,” he said. Melvin then asked a follow-up question: “Did you ever apologize to her?” Clinton replied, “No … yes…” He then accused Melvin of only presenting one side and omitting facts. Later in the interview, Melvin once again asked him whether he had apologized to Lewinsky, to which Clinton responded that he has “apologized to everybody in the world,” but never to Lewinsky privately or in person. “I have not talked to her,” he said, adding that he doesn’t think he needs to do that now. He also said he supports the #MeToo movement in general and says it has been long overdue. 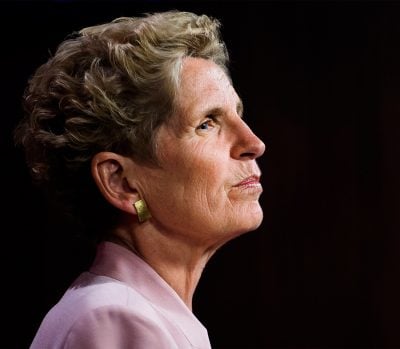 Was Kathleen Wynne’s Concession A Power Move Or A Desperate Act?

By evening, Clinton was trying to smooth it all over. “I got hot under the collar because of the way the questions were asked,” he said Monday night at an event in New York City. His response to the “hubbub” Monday evening was widely seen as a doubling down on what he said in his NBC interview.

Remind me what happened with Clinton & Lewinsky back in 1998?

Back when Clinton was president in the mid-1990s, he had an affair with Lewinsky, who was a White House intern at the time. It lasted from 1995–1997, but came to light the following year. Clinton famously ended one of his speeches that year by saying, “I did not have sexual relations with that woman.” The whole thing led to perjury charges and Clinton’s impeachment. He was acquitted of those charges, as well as of charges of obstruction of justice, after a 21-day Senate trial. Clinton remained in office until the next election, but the public never forgot Lewinsky’s stained dress, which was entered as evidence. She has since spoken out about the post-traumatic stress disorder she was diagnosed with after the highly public scandal, and has committed to fighting bullying of all kinds.

How did people respond to this interview?

The interview (and the subsequent double down) left supporters of the #MeToo movement less than impressed. Rebecca Traister, a journalist at New York Magazine who has covered the Clintons since the 1990s, asked whether this was the former president’s #MeToo moment. “Clinton’s feckless replies to questions about #MeToo revealed an unpreparedness that spoke volumes about why men have been able to abuse their power with relative impunity for generations, while the women around them have been asked to pay the price for them over and over and over again,” she wrote. And Lily Herman at Refinery 29 called out the system around Clinton, which she feels has insulated him from scrutiny over his behaviour back in the 1990s and now. “What grinds my gears about Clinton isn’t just the fact that he hasn’t seemed to really learn his lesson; it’s that other people have coddled him so that he really doesn’t have to.”

Bill Clinton. Here is the truth of it: a human life was altered & destroyed due to your selfishness. Because. You. Could. You not only wiped your semen on a young girl’s dress, you left a stain on society. You actually owe EVERYONE an apology, especially her. #MeToo pic.twitter.com/HWnsAmXjlR

Did Bill Clinton just #metoo Monica Lewinsky??? I (almost) have no words… Props for always being ahead of the curve as the first male to publicly somehow claim victim-hood from his actions against women. Balsy! Stupid… but balsy!!! https://t.co/Fvn7Cp3OmP

What did Lewinsky say?

Shortly after the interview aired Monday morning, Lewinsky sent out this tweet linking to a conversation she had with Vanity Fair to mark 20 years since the scandal. She has said nothing more about the interview since.

grateful to the myriad people who have helped me evolve + gain perspective in the past 20 years.

worth reposting this today from @VanityFair …https://t.co/u9Ta13Alz3